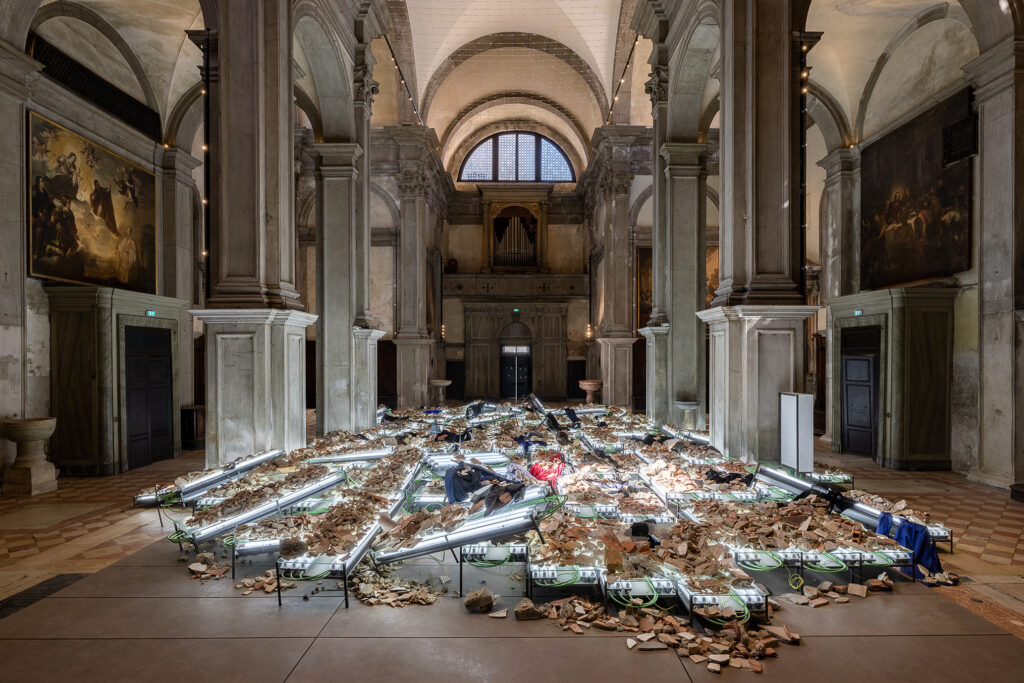 Cabrita (* 1956 in Lisbon, Portugal), one of the most distinguished and prominent artists of our time, presents Field, a large-scale sculpture within Chiesa di San Fantin, Venice, during the 59th International Art Exhibition, La Biennale di Venezia.

Out beyond ideas of wrongdoing and rightdoing, there is a field.
I’ll meet you there.

Field dominates the vast interior of the church, spreading out, on, and across the central area of the nave. Its expansive, varied topography grounds and holds the floorspace, reinforcing the perception of the volumes above. The sculpture is a form of low-relief, consisting of an indeterminate grid of steel platforms which evoke the passerelle used during acqua alta conditions in the city. Complete within its boundaries, a multitude of uniform LED light tubes burn steadily on these platforms, underneath the occlusion of debris that appears to have rained down from above. The overlaid chaos of the debris field contrasts strongly with the regularity of the lights forming the grid below.

Through Cabrita’s use of vernacular materiality (industrial lighting, demolition fragments) which summon archaic conceptual mythologies (as above, so below; light versus dark), Field occupies a literal, as well as figurative middle space, setting up a state of affairs for the viewer to resolve physical, conceptual and spiritual tensions. Presented during current and ongoing threats to humanity on this planet (pandemics, climate change, political divisions, techno-feudalism), Field invites engagement and awareness in a physical environment that offers viewers the opportunity to engage their imaginations, in manifesting alternative future possibilities, and potentialities that can be personally enriching and mutually rewarding.

Painting has formed the foundation of Cabrita’s complex practice; his further development in this medium has led him to create three-dimensional works and in-situ constructions. Complex compositions literally take possession of the chosen exhibition space, creating an atmosphere of emptiness, solitude and silence. Themes such as space, territory and time, given materiality and form, emphasise existential questions regarding self and cultural memory within differing contexts: “For me, an artwork is a produced reality that focuses the experience of reality as insight”, he explains.

Cabrita considers it the artist’s purpose to manifest a reality that transports memories, thus keeping those memories alive, repeatedly insisting on the essentiality of memory for our comprehension of the world. He regards architectural structures as memory cast in form, as the embodiment of memory. In this connection he speaks of “aura”, by which he refers to the meaning and signs of the time, interwoven with the architecture and mirroring human coexistence.

This exhibition is organised in collaboration with KEWENIG, Magazzino, Mai 36, and Sprovieri. A 160 page full-colour illustrated catalogue with texts by Michael Short and Sir Nicholas Serota will be published by Skira to accompany the exhibition.

Cabrita lives and works in Lisbon, Portugal. His work has been shown internationally in museums such as the the Museo d’Arte Contemporanea Rome, Italy (2006), the Kunsthaus Graz, Austria (2008), the Museo Tamayo, Mexico City (2009), the Hamburger Kunsthalle, Germany (2009/2010), the Museu Colecção Berardo, Lisbon, Portugal (2011), the Hôtel des Arts, Toulon, France (2015), the Serralves Museum of Contemporary Art, Porto, Portugal (2019), and most recently, the CAC Centro de Arte Contemporáneo de Málaga, Spain (2020). Cabrita participated in the Documenta IX, Kassel, Germany (1992), the XXIVth São Paulo Biennale, Brazil (1998), and the 10th Biennale de Lyon, France (2009). In 2003 he represented Portugal at the 50th Venice Biennale, and during the 55th Venice Biennale (2013) his installation A Remote Whisper was presented in the Palazzo Falier.

The Musée du Louvre has invited Cabrita to exhibit his large-scale interpretation of Les Trois Grâces as part of the 2022 France-Portugal Cruzada Season.
Currently on view at the Jardins de Tuileries until mid-June, Les Trois Grâces consists of three elements that are made of cork, each one measuring approximately 4.5 meters in height. They are supported on an iron base, and symbolize the persistence in art history and the need to review the topic of representation to understand a monument.

“These figures come from the depths, long before Athenian democracy, pass through the Roman Empire, reach the Middle Ages, have an even more accentuated moment of brilliance in the Renaissance, reappear again in the 17th and 18th centuries with Rubens, and reach the modernity with Picasso, Matisse, and all that.” Pedro Cabrita Reis